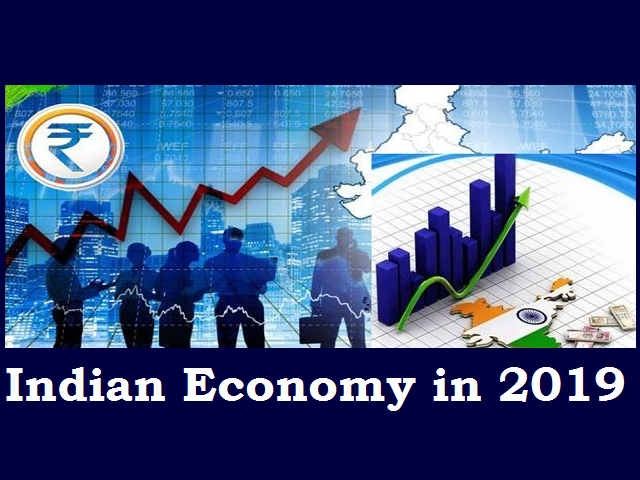 Indian Economy in 2019: It was a bit challenging for the Indian Economy to overcome all the hurdles and barriers. India saw a steep decline in its growth rate in the July-September quarter of 2019, when Gross Domestic Product (GDP) was at its lowest in 7 years at 4.5 percent. Several sectors such as real estate, aviation, automobile and construction sectors suffered a constant decline in demand. On the other hand, the Banking sector and financial services witnessed serious crisis due to rising NPAs & bad loans and squeezing credit limits.

Organisations such as World Bank, International Monetary Fund (IMF) and Moody’s had repeatedly cut down the GDP Growth rate in their forecasts. The most recent one was the Moody’s cut of India’s Sovereign Credit Rating Outlook to ‘Negative’ from ‘Stable’ due to the government’s failure in handling the economic weaknesses of the country.

This economic slowdown could be attributed to weakened investments and declining consumer demand. To revive the Indian economy and improve its growth rate, the Central Government announced and undertook several measures and initiatives. Have a look at the major events of the Indian economy in 2019:

The first Economic Survey of the second tenure of Narendra Modi-led government outlined the blueprint to achieve the vision of making Indian a USD 5 trillion economy. The Economic Survey was prepared by the CEA Krishnamurthy Subramanian. It pressed for the adoption of behavioural economics and transformation from ‘Beti Bachao Beti Padhao’ to ‘BADLAV’ and from ‘Swachh Bharat’ to ‘Sundar Bharat’. The Economic Survey 2019 projected the GDP growth at 7 percent for FY 2019-20.

Union Budget 2019-20 was the first maiden budget of Finance Minister Nirmala Sitharaman. With an aim to take Indian Economy to USD 5 billion by 2024, the budget re-initiates disinvestment of Air India, strengthens NBFCs, offers incentives for startups and MSMEs, suggests a merger of Bank, eases the tax compliance norms and focuses on overall infrastructural development. The Union Budget 2019 was termed as “Green Budget” by PM Narendra Modi as it prioritises transformation of ‘Gaon’, ‘Garib’ and ‘Kisan’. The Budget eased the tax compliance norms and offered tax relief for individuals buying affordable houses and electric-vehicles.

Corporate Tax Rate Cut to 22%: One of the lowest rates among other Countries

Union Finance Minister Nirmala Sitharaman slashed India’s Corporate Tax Rate to 22 percent with effect from April 1, 2019. The tax cut aims to stimulate private investments from international players. As per PM Narendra Modi, the Corporate Tax cut will be a win-win situation for over 130 crore Indians.

Merger of 10 Banks: All you need to know

Exemption from Angel Tax for Start-Ups

In order to encourage investments in Start-Ups, the Central Government approved exemption of Start-ups from the ‘Angel Tax’ under the Income Tax Act, 1961. The registered startups have been exempted from the Angel tax on funding or investment of up to Rs 25 crore. Before this, the limit was Rs 10 crore.

The Central Government approved the disinvestment of 33 Central Public Sector Enterprises (CPSEs) in the year 2019. These 33 CPSEs include bug names such as Air India, Pawan Hans, Bharat Petroleum and others.

The Reserve Bank of India in June 2019 removed the charges levied on fund transfers through RTGS and NEFT to boost the digital transactions. The move was broadly aimed at deepening the financial markets. The decision came as a follow up of the recommendation made by the Nandan Nilekani-led Committee on Digital Payments to promote digital payments in India.

Saudi Aramco to own 20 percent stake in Reliance Industries

Saudi Aramco announced to acquire 20 per cent stake in Reliance Industries Limited (RIL) oil refinery and chemical business. The deal will be valued at USD 75 billion (over Rs 5.3 lakh crore). Once accomplished, the RIL-Saudi Aramco deal would be one of India’s largest FDI (foreign direct investment) deals till date.

What is RBI Surplus and what does RBI giving its surplus of Rs 176000 crore mean?

Reserve Bank of India (RBI) had mandated all the banks to link the new Personal, Retail, Housing, Auto and MSMEs loans to the External Benchmark based Rate with effect from October 1, 2019. The move aims to ensure faster transmission of Policy rate cuts to loan borrowers. The External Benchmarks could be any among these – RBI’s Repo Rate, 3-Months Treasury Bill, 6-Months Treasury Bill and any other benchmark rate published by the FBIL.

India exits from RCEP agreement: Know all the reasons

Prime Minister Narendra Modi announced that India will not join the Regional Comprehensive Economic Partnership (RCEP) after it failed to address the key concerns of India. During the past 7 years of India-RCEP negotiations, several things including global trade scenarios have changed.