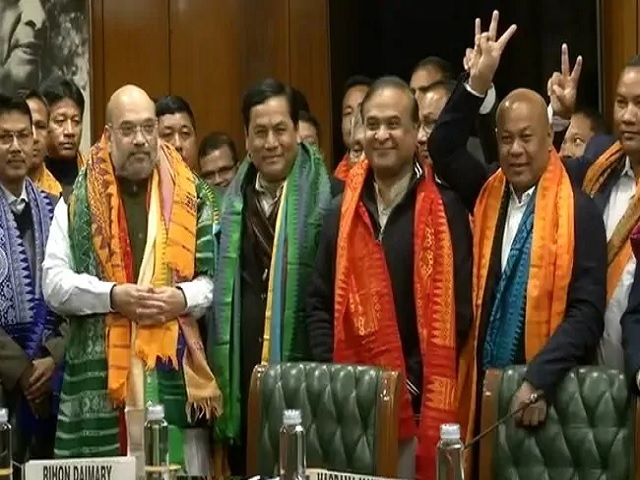 Bodo Accord 2020 in News: The center government signed a peace agreement on January 2, 2020, with the National Democratic Front of Bodoland (NDFB), one of the dangerous militant groups in Assam. The All Bodo Students Union (ABSU), agitating for a long time demanding Bodo state, also signed the deal.

The agreement provides political and economic benefits to the tribal areas without seeking a separate Bodoland state or union territory. The tripartite agreement has been signed by Assam Chief Minister Sarbananda Sonowal, the leadership of four factions of NDFB, Satyendra Garg, Joint Secretary of ABSU, Ministry of Home Affairs and Kumar Sanjay Krishna, Chief Secretary of Assam.

Key Highlights of Bodo Accord

• The Minister of Home Affairs, Amit Shah, said on this occasion that the Central Government, Assam Government and representatives of Bodo have signed this historic agreement.
• He said that this agreement will ensure the bright future of the people of Assam as well as the Bodo tribe.
• He also said that the 1,550 Bodo members will surrender on January 30, 2020, with 130 weapons.
• He ensured all the representatives that all the promises will be fulfilled in a time-bound manner.
• Bodo tribes will get political and economic benefits after this agreement. The agreement will provide some political rights and some economic packages to the community.
• According to the political pundits, the agreement will ensure the safety of Bodo language, cultural and regional matters.

History of Bodo Accord

• The government of India has been signed three agreements with Bodo tribes so far for 27 years. Several clashes between extremists groups of Assam and the government have claimed hundreds of lives.
• The All Bodo Students Union (ABSU) and the Government of India have signed the first accord in 1993. This agreement resulted to the creation of a Bodoland Autonomous Council with some political powers.
• The second Bodo accord was signed in 2003 between Government of India and extremist group Bodo Liberation Tigers (BLT).
• The second agreement resulted to the formation of Bodoland Territorial Council (BTC) with four districts – Udalguri, Chirang, Baska and Kokrajhar. These areas are commonly called Bodoland Territorial Area District (BTAD).

Bodoland Territorial Council (BTC) was constituted to look after issues of Bodo tribes like education, horticulture and forests. However, police, general administration and revenue are controlled by the Government of Assam. The BTC was established under the 6th Schedule of the Indian Constitution.

What is Bodoland Movement?

The Bodo people are the largest tribe of Assam settled in the northern part of the Brahmaputra river valley. These tribes claimed themselves as natives of the Assam. According to an estimate, the Bodo tribe is about 28 percent of Assam’s population. The Bodo tribe has been complaining that their land in Assam was occupied by other cultures and communities with different identities. In 1966 the Bodo tribals formed the Plains Tribal Council of Assam (PTCA) and demanded a separate union territory Udayachal.

The Bodo movement started witnessing violence post-1980s. Now, this movement divided into three streams. The first group NDFB is demanding for a separate state for itself. The second group Bodo Liberation Tiger (BLT) is demanding greater autonomy and targeted non-Bodo groups. The third group All Bodo Students Union (ABSU) is looking for more political powers and involvement in state administration.